Have you seen the front page of today’s Washington Post? Color picture, above the fold, 3/10ths of a page: 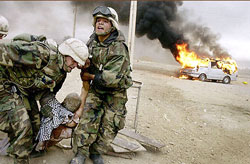 By itself, this is a moving image, though not unexpected during an invasion.
But it immediately occurred to me, this is Baghdad. While all the news reports might show you pictures of jeeps and tanks rolling through open deserts or ramshackle villages, those are not Baghdad.
Baghdad is a city of over 5 million people. There are over a thousand grade schools, three major universities. Baghdad was arguably the cultural center of Iraq, and most of the arab middle east, until the late 80s. The city itself is almost 1,300 years old. 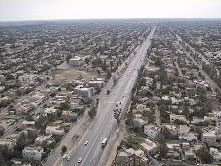 This is a city entire orders of magnitude larger than most of you have ever lived in. Modern and huge. And yesterday we rolled through there with a column of tanks. In and out. And judging from pictures like this, leaving a trail or wreckage in our wake.
Man… I am such an American; because I just cannot imagine what it would be like to live through that.