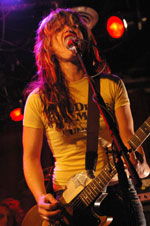 How could I not love this woman? That’s Rachel, from Visqueen. The unwitting love of my life for the last year an a half. She just doesn’t know yet that she’s really in love with me. *shrug* In the mean time, they have a flickr account now, with much goodness. More than a few shots I recognize from their live shows here.
Yes. I’m back. Survived 4 and a half days without wifi. Somehow. (Okay… so the 400 k/s ethernet wasn’t bad). Survived my family, which is a bigger feat. Sadly there were no fights or embarrassing acts of a physical nature to record for posterity’s sake this years. As Michele said, “it all seemed to go by so fast”. I had even gone up a day and a half early, so that I might have some time to myself, to think deep thoughts (and download porn). Being my one year anniversary of the self-employment thing (*knock on wood*), I want to find time to go over everything I’ve done, and figure out what’s next. But all that damn meaningful family crap got in the way in Texas.
I’m trying to think of how to describe the good things about seeing family. It isn’t coming to me. It’s not the wild and crazy shit your friends and you do. It’s the people who won’t kick you out because they disturbingly understand and sympathize with the stupid shit you’ve done and the dumb-ass you’ve acted like. You share some common history of trauma, and aren’t disturbed when the other couple’s baby looks a bit like you.
A former co-worker with a obvious Australian accent made a comment once about his cross country commute, to the effect that he never unlocked his car doors while driving through Texas. “Yall’s not from ’round here, is y’all?”. Of course he was overly paranoid. It’s not like he was in the back woods of Mississippi or something. But even so, some shit down there disturbs even me. You can be guaranteed of a couple half-hushed racist comments or discussions, involving Blacks or Hispanics. I don’t get too worked up about this one. Racism, at it’s core is about opinion and attitude. And even if I happen to think its an opinion best left to inbreeding mental defectives, no matter which direction it’s coming from, it’s still their opinion, and they’re free to speak of it. I just excuse myself from the conversation or room.
The level of ignorance was a bit disturbing though. Particularly about the government and wars. It was like they were reading right from the White House press releases. Freedom. War on Terror. Those people. The monsters in that region that just wanna kill everyone. Iraq is gone… we’re safe from them now. Iraq equals 9/11. Even heard how Bush is a wimp and we need a more aggressive president. (Both Bush Jr and Clinton launched more military actions than the previous administrations for two decades back).
SO… you know… patriotism scares me. Patriotism has become loving your country no matter what. Love it or leave it. Growing up I loved this country because I believe it when they told me how free and caring we were. How we stood up and protected oppressed people, and fought back against the bullies who picked on us. If we lived up to just half of our marketing slogans…
Yeah… I don’t know what I’m saying. I’m gonna go back to looking at that picture of Rachel.