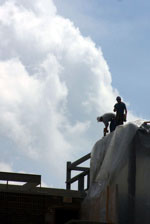 I’ve been watching them as they put an addition on the top floor of the building across the street. They’re about ten stories up, and roughly horizontally parallel to my front windows. And God how I would love to be up there with them.
Can you imagine the feeling of standing up there on top of the world with nothing around you? None of the safety nets and railings. None of the warnings and notices. In this town, were everything must be made new again on a regular basis, the rooftops are ignored. You can still see aberrations from the 50s, 60s, and seventies. Up there, there’s still glass-walled cooling towers and rooftop basketball courts, straight out of a Baretta episode.
I’ve been up there once before, myself. Not across the street, but down in Puerto Rico. We’d built the forms and watched them poor a concrete rooftop. I can distinctly remember sitting on the tarred portion of the roof, watching the cement dry. Looking out over the valley in the middle of the rainforest, knowing that no one else but the few of us up there had this amazing view.
It’s not a particularly sweet or pleasant job. It’s dangerous, dirty, and tiring. My father worked as a roofer many times while I was growing up. Most of my memories involve him coming home sunburned, with new scratches and scrapes, and tar melted to his boots. A couple times I worked cleanup, shoveling broken tiles from around the house into a dumpster. There’s some family bonding time you don’t see on the Pax channel.
There are times where’d I’d love to be up there, without politics, coming home tired from work and not stress. Knowing I’d just built something on top of the city, and never the exact same thing twice.