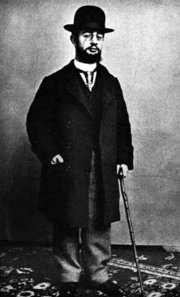 I meant long ago to write up something about my visit to the Henri de Toulouse Lautrec exhibit at the National Gallery of Art earlier this year. But you know… I’m a lazy fuck.
Lautrec did all those gaudy, risqué French posters you’ll see in coffee houses and young women’s apartments. In fact, I think he’s one of the few major fine artists primarily known for blatantly commercial work. The show even had work from his projects for the infamous Moulin Rouge.
His posters started the show. They’re certainly his most famous work. The progression you could see in his style was pretty cool. From his early works which were purely illustrated portraits, to his later work, which included visual depth, and a greater understanding of design principles.
What affected me most in the exhibit were his paintings of everyday life in the Montmartre district. His paintings of his peers and friends were incredible. I remember looking at a painting of a young man standing in the street, and realizing how totally in-place the same person would look if they could just step out of the painting. All the works were showing this… these people were living the exact same life I see around me know, but only a 120 years in the past. You knew exactly how these people would act, because you could so immediately identify with them. It was a pretty incredible feeling. Montmarte of 1895 could be any artists neighborhood in any major city today.
The show finished up with a collection of works from some time he spent living in a brothel, recording the lives of the women around him. These works seem so much more honest than most pre-Modern fine art. There are women in all their beauty and all their not-so-beauty. Women lined up on benches, waiting for customers. And lesbian brothel workers, comforting each-other in bed.
The other thing that struck me about this exhibit, more and more as I walked through, was how closely Laurenn McCubbin‘s work and career seems to be following Lautrec’s. Right from the start, there were some obvious stylistic similarities in his poster work. I can’t help but think of Laurenn’s paintings of Kelly Sue and company, when looking at the candid paintings Lautrec did in MontMarte. And Rent Girl

, which I had recently read, came to mind when I saw his work from the brothel.
I only hope Laurenn doesn’t drink herself to death and end up in an Asylum.