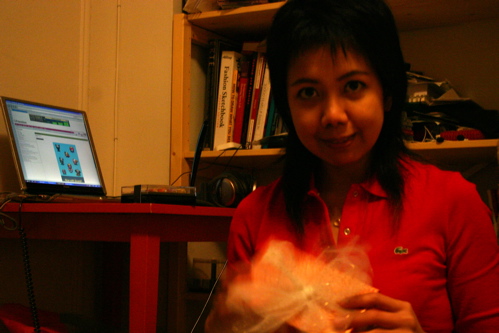 I spent last night in NYC, with Indri. Two words to describe Indri: disgustingly cute. You know… in every possible way. She’s got chipmunk cheeks, big anime eyes, and bouncy little outfits to match a bouncy little personality. She rambles on about anything and everything, and still comes across as fascinated with life and her surroundings. And those occasions when she doesn’t seem to know what to say, a look overtakes her face like she just stepped in pudding. In the nine or ten years I’ve known her, she’s never once let on that she’s anything more than sweet and polite, with a little bit of innocent mischievousness, which I take as reality, since it would be a shame to believe anything else. In her presence, I can’t bring myself to spout my more lurid innuendo that someone like Sara might experience. It would be like drawing a mustache on the Mona Lisa. I can’t even be as stubbornly negative as I occasionally still tend to be.
I swear… she’s a living pixie.
(There, Indri. NOW you can be embarrassed.)
Hopped the Washington Deluxe each way, which turned out much better than expected. I’d heard them referred to as the “pauper’s limos“. But I personally think it’s a pretty amazing service, for only $35 round trip. Top of the line busses, that make Grayhounds look like mobile shithouses. Clean and well kept up. Televisions with movies at the start of each ride. convenient pick-ups and drop-offs in the heart of each city. Couldn’t get all that if you drove your own self.
New York City always fascinates me. I came from New York to DC almost exactly 8 years ago. And although I’ve dug out my own niche, I’ve never fit perfectly here. And each time I visit New York, I’m reminded why. While I grew up in Geneva, somewhere up in central NY, there’s a certain ruggedness of personality, about any New Yorker, no matter where they call home. And no where does this essence seem more concentrated than New York City. It’s especially visible in the women, most of whom have the air of just having castrated a potential mugger with their umbrella, and are now on their way home to slip into pink, fuzzy slippers. Where women in DC confronted by lurid behavior may go the other way, cry, and sue, (not necessarily in that order), the same New York woman would probably grab the man by the balls and threaten to remove them manually if the assailant doesn’t grow a brain cell. You know, it’s there in the men too, but harder to notice since aggressiveness is more universally common in them. I remember a line from Crocodile Dundee that was supposed to be funny, about how New York City must be the friendliest place on earth, if 20 million people all wanted to live together. Joke or not, there’s a tiny bit of truth in there. I don’t know if you can call it friendliness. But the residents all seem to realize they’re packed in like rats, and naked hostility and apathy aren’t going to help anyone. New York City is really one of those places you can only experience first-hand.
Oh… yeah… happy birthday, Indri.