I went on my first bike ride of the year, today. This of course means I’ll be walking bowlegged tomorrow. But in the meantime, it felt good. Afterwards. When I’d had a chance to drink something. And breathe. Though the ride did actually go better than the last one I remember. May have had something to do with finally breaking out the WD-40. But I’m going to pretend its all about this tower of masculine fitness that i call my body.
I’m trying to decide something, though. Every time I ride down on the mall, the ride west always seems at least twice as hard as the ride east. And the change is so sudden that I can’t believe it’s always from taking the east route first. I think the southern path has more loose gravel and stone. It’s terrible for traction.
So I sat down by the tidal basin and read for a while. No more cherry blossoms. And hence, no more tourists. Really was nice out there though. Watched a storm pass over Fairfax and head south. This heavy cloud ringed in orange, with stretched, cottony strands connecting it to the ground. 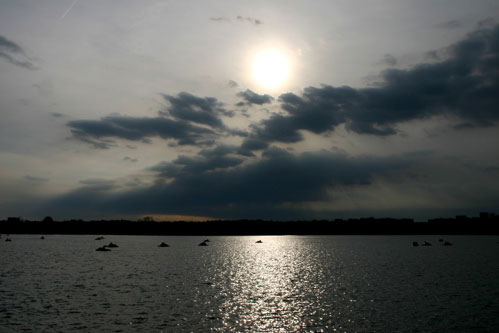 Likewise, I didn’t feel like cooking last night, so I picked up a sub at Potbelly and ate it in Lafayette Park behind the White House. This park is, as they say, spitting distance from the actual building of the White House. It’s kind of nice. They generally keep the homeless people out of it. And there’s enough tree cover to block out the street noise. Of course, any time you hear about someone jumping the fence, or stabbing someone outside the white house, or pulling a gun, this is where they do it. But, you know, psychos can have taste, too.
But I’m sitting there eating and reading and looking around. And I have a thought that still frequently comes to me. It’s really hard to believe that I’m sitting and eating, a stone’s throw from, depending on how you look at it, the single most potent seat of power in the entire world. It’s hard to believe you can get so close. It’s hard to believe that it’s me who’s sitting there, so far away from the little redneck town in eastern nowhere, where I never had friends much less hope. It’s hard to believe that simple building over there can raise up men to another planet, or kill so many people right here at home.
Then some birds started squawking and having birdy sex on the grass in front of me.
Thought:
A couple weeks back now, it was a minor news story because, depending on how you write your numbers, the time and the date were about to spell out 01:02:03 04/05/06. I’ve been lazy about writing this down, so I’m sure no one cares any more. But I have two responses to all the things I read about this phenomenon:
1. People said “this will never happen again”. More optimistic people pointed out, “this will happen in another 1,000 years”. I think you should all go and demand your money back from your school teachers. Unless I’m totally off my rocker, this set of numbers will happen in just another 100 years. And every consecutive 100 years, until we change the way we tell time.
2. Everyone and their mother’s poodle was saying that at the precise moment, they would stop and hold their breath, or look up in the sky, or cheer, or… . Why? Yeah… this is a cute novelty. But why does a coincidental label cause you to declare this a special day, worthy of effort and commemoration? What kind of sad life do you have when you don’t aim for that kind of special-ness every day?
Another thought:
Why has patriotism become a thing of war and conflict? Why is the word only brought up in connection with fighting soldiers and those in context with them?
Final thought:
About 3 weeks ago, I walked down my street thinking, that although it was bright and sunny, it was still undeniably winter. The sun was still harsh, and the air still smelled of… nothing. A week and a half later, and spring was here. The air is fresh, and the light is a bit more hazy. The tree in front of my windows has started to bud. When the leaves scorch under the sun to a dark, forest green, summer will be here again.