Have you ever read Syrup, by Max Barry*? Pretty good book, released years ago. Focuses on a drink concept created by a man, and his attempts to maintain control of it long enough to get Coke to give him money for it. Product is named Fukk, and comes in a sleek brown container. Very angsty and shit. (No… really, I have a point here.) So I was waiting in line at the Soviet Safeway on Monday, and I notice a stack of Coke bottles on the floor. In slick black containers. With the name “Bläk” on them. At the exact same time, I both wanted desperately to buy one, while hating the thought of what went into that product if it was anything like Barry’s story.
*Barry spelled his name with two Xs on that book, as a joke. 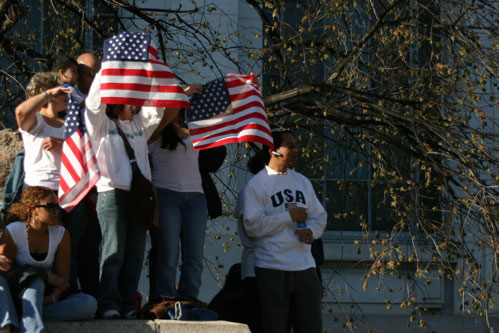 That same day, I decided to go down and check out the Hispanic Immigration protest marches on the National Mall. I wasn’t expecting too much. I’d only heard of this particular march the day before. And marches that take place on a weekday are typically pretty small. But almost as soon as I stepped out of my front door, I knew something was up. The one sure thing to scare off the few locals who are willing to descend into the tourist regions of DC is to tell them there is a major protest or event going on near the Mall. But As soon as I left my apartment, a good 8 to 10 blocks form the Mall, I was surrounded by locals heading down there. Mostly hispanic families. Whole families, with grandparents, people fresh out of work, and babies in strollers. Several times I passed a pickup with a bed full of shouting people and waving flags. By the time I made it to Pennsylvania Avenue, I was caught up in a huge wave in people flowing onto the Mall. Another wave of almost equal size was flowing out of the Mall. By the time I got up to the Mall proper, it was really enough to stop you in your tracks. The entire Mall, full, practically shoulder to shoulder, with people, mostly hispanic. Tens of thousands of people at least. Bigger than 90% of the major gatherings I’ve seen on the Mall. The size of the Protest was staggering enough, primarily because I wasn’t expecting it. But a few other things rather quickly stood out. People who come to DC to protest are usually upset. They’re pissed an they want to make sure everyone knows it. Their signs are angry, their chants are angry, their costumes are angry. But at the Protest this week, everyone was smiling. Everyone was cheering. (Something I’ve never heard on the Mall in 8 years here). It had to be the most positive experience I’ve ever seen in DC. Sure these people wanted change. But they didn’t come in saying “you fucked us over”. They said “we love it here”. “we want to live here”. “We’ll do anything for this place, if you’ll just give us the chance”. And everybody was waving the American flag, in one way or another. Flags on poles. Flags on sticks. Handkerchief flags. Flags as capes. Flags as shirts. Flags as signs. 50… 100,000 flags, all being waved every time a cheer went up. These people, who were there to protest some seriously disturbing bills aimed at them and people who help them, were more positive about America than any other group I’ve seen bring their message to DC.
Anyway…
Since Monday morning I’ve been torturing myself over a project. It’s not particularly complicated. And I had no trouble coming up with some clean layouts that looked just fine. For various reasons they were just fine as is, really. But I really wanted to come up with some stronger “concept” behind the whole thing. But there were just so many things working against me. The type of project, the resources I had to work with. The nature of the client’s personality. So it drove me nuts for three days. This afternoon I told myself it wasn’t worth it anymore, and packaged up everything to deliver to the client. And after 15 minutes discussion, they narrowed it down to exactly those early, safe versions I worked up in 5 minutes on Monday morning.
Did I mention their “new” logo strongly resembles cigarette packaging?