My one real problem with my camera was taking flash-assisted shots. I don’t have an external flash at all, much less a nice adjustable one with built-in-diffuser. And without diffuser or some angling, flash shots always come blow-out, with sharp, dark shadows being cast, and backgrounds being lost.
But while digging around last week for information on flash units and diffusers, I came across directions for an interesting method of diffusing the built-in flash on an SLR camera. There are plenty of suggestions for making such diffusers, but they usually involve taping sheets of something to your camera. In this case, you trim down one of those translucent 35mm film canisters you probably have laying around; and it fits snugly over the flash unit, and provides a smooth, stable diffuser.

It’s absurdly easy to make. And once most people get past the initial shock of what-the-hell-is-that, they tell me that they’ll have to try it themselves. Of course, they may just be being polite, now that they know I have access to sharp instruments. 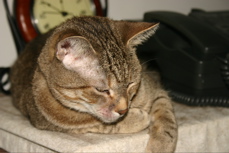 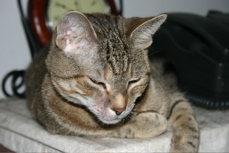 Pixel served as an unhappy test subject, when I tested the contraption on Friday night. It was just one set of photos, so not a great sample. But the lighting was definitely more even. The foreground didn’t wash out. And the colors were true-er.
I took it all with me to a party on Saturday, and Took about 50 shots with the setup. And really, under less than ideal circumstances, it performed great. My only problem now that I can use the flash again, is that my camera doesn’t take the light from the flash into account when calculating the light levels in Aperture Priority or Time Priority or any other such modes. So saturday, I was playing around, taking multiple shots, to find an appropriate aperture/shutter-speed, relative to the use of flash. But overall, it was great. Not a single completely unusable photo the whole night. And quite a few I really like. 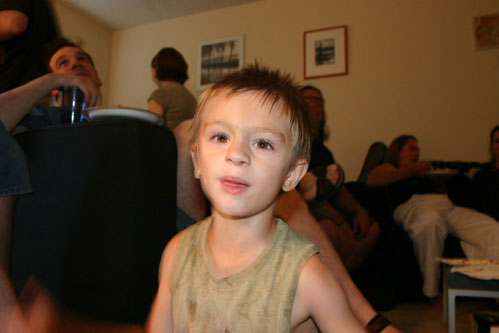