About two months ago, I went through my print photos. This wasn’t a small job. The main collection alone averaged about 2,500 photos. There was no organization, and probably half of them were not in albums. Most of them had never been labeled. And frequently, the negatives had fallen out of their envelopes and become mixed with the negatives from 20 other years worth of photos. But they’re now sorted, labeled, and booked. The negatives have been broken down by subject into envelopes.
One of the things I noticed, was how frequently I would look at a negative and realize I don’t have a print of at least one of those shots. For the most part, this doesn’t particularly concern me. Ninety-five percent of the pictures were taken on 35mm film, which can still be developed by every street corner drug store and grocery market. Besides which, one of my long term goals is to get a negative scanner–preferably with an auto feeder, so I can have some high quality digital versions of all of my images.
But I did find one ‘roll’ of film from a disc camera. A miserable failure of a camera format, that went too far in trying to appeal to the lowest common denominator. (*cough*APS*cough*). I didn’t have prints of any of the shots on the disc. And unfortunately, I haven’t seen any place in the last 15 years that regularly develops Disc film. But as with everything else, the internet is the answer to all things. Dwayne’s Photo will for a reasonable price, develop your antique film formats, and for an unreasonable price, ship them back to you. (They charged me $5+ for shipping, but spent about $1.88 on the envelope and postage). 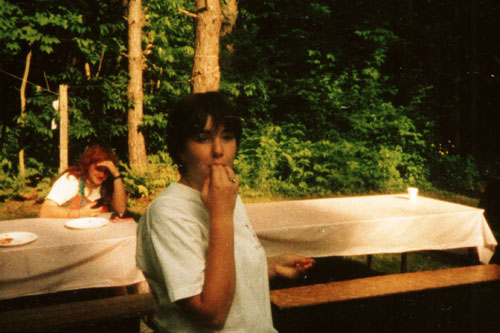 The pictures are from a weekend trip I took to my friend’s (Michelle Rink) graduation, back in high school. (Yes I had a crush on her, but living a couple hours away, without a car, took care of that.) As stupid as I may have been back then, I do remember very good things about that weekend. Back then, just getting to see her was great. And she lived on this beautiful bit of land near Cazenovia. The strongest memory from that weekend has to be from the party after graduation. At one point, we were watching movies in a media room, and it was her and I curled up on a couch, yelling at other people in the room. And it felt like the best thing ever.
*shrug*
Gawd. Looking at these pictures now, I can’t believe how cute she was. And she was so sweet, and looking back, so smart. I was soooooo stupid not to stay in touch for longer after she joined the Navy. I regret many of the choices I’ve made or had thrust upon me, about women. But somehow the earliest one’s are the hardest to live down.
I remember getting a letter from her a couple years ago. She was married (now Michelle Eiband) and living somewhere new. Never heard anything after that. I found her the other day on classmates.com. But I don’t exactly have the money to spend $30 just to send her an email right now.