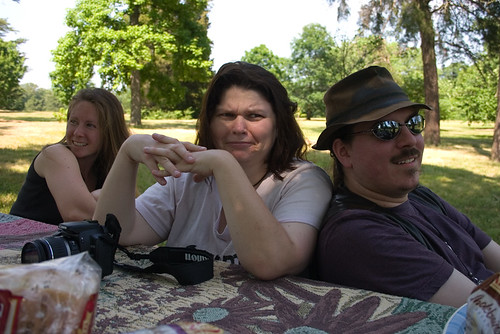 The birthday picnic was wonderful. They weather was perfect all day, the location was a great retreat from the city, and everything went off without a hitch. It was a fairly small group, but I think everyone had fun.
Got a call this afternoon from Drew, saying he had overslept and was going to be a little late to the picnic. Indeed.
After the rapping park police kicked us out of the Arboretum, a couple of us headed over to Dupont Circle to watch the Pride Parade. 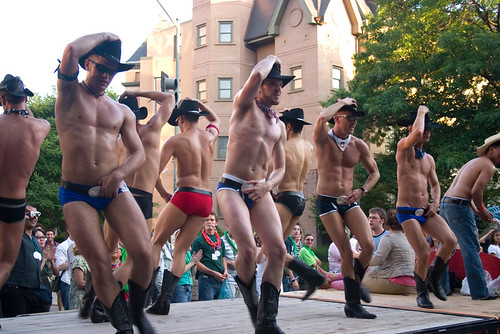 I always enjoy the parade. It’s one of the only major events in the city based on something positive and cheerful, rather than disagreement and dispute. And the event gets bigger every year. It’s overwhelming, with so many people, and streamers, and colors, and outfits…
After watching the men with the leafblowers follow up the parade, and sitting through a free fight and show at the fountain in the circle, Kier went off to shake his groove thing, and Stephanie and I went to Fuddruckers for the next 6 hours.
Can I just say… drunk people are fun! But… I don’t know which club we were hearing from, but OH MAH GAWD, did the music suck. I mean… it was all fun music from when I was growing up. But I so don’t go to a club to hear 1980s and 90s top 40.
Stephanie was quite disappointed that I wouldn’t approach this amazon of a woman who came into Fuddruckers. But when we, and everyone else in the place, realized that she and her friend were in fact WNBA players, they never really got any privacy anyway. And by that time, I couldn’t have seriously approached her and pretended I didn’t know who she was, regardless of whether I initially cared. *shrug*
Very long day. Lots of fun. Lots of friends.
(Note: After checking out the Mystics’ website, it looks like the WNBA players were maybe Stacey Lovelace-Tolbert and Coco Miller.)