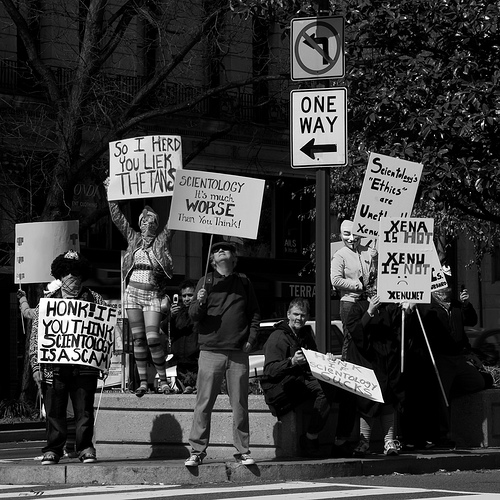 Stupid little buggers.
I went to take pictures at the Anonymous protest, yesterday. Anonymous — if you’re unaware — is a protest movement against the Church of Scientology. The movement’s organizers cloak themselves in anonymity to “protect” themselves from the Scientologist’s well-documented harassment of any critics. So the protests are generally a lot of people in masks (see: Anonymous) waving signs outside any branch or office of this “Church”.
The general things that the protesters are upset about include Scientology’s secrecy, their financial focus, questionable physical and mental health practices, their tax-exempt status as a church, and their harassment of former members any just about anyone trying to find out any details about them.
But I had a vaguely bad feeling when I was reading a bit on the local Anonymous chapter’s website, here in DC, on Friday night. They were specifically telling their ‘members’ to be doubtful about anyone who showed up that wasn’t part of the protest. Anyone who stopped nearby, or anyone who asked questions, or talked to them in any way, was supposed to be viewed with distrust, since they could be a scientologist “mole”. And sure enough, within about two minutes of arriving, and taking pictures from a nearby meridian in the street, (right next to the traffic cop assigned to keep order), I had people looking at me suspiciously. There were plenty of people pointing at me, soon enough. And lots of pictures and video footage including me, eventually. A few of the braver souls eventually yelled across the street that I should have been more subtle… I was too obvious a plant.
A plant for what? I wasn’t talking to them. I wasn’t getting in their way. I wasn’t trying to disseminate my own message. Assume the worst… that I was L Ron Hubbard reincarnate… then what harm was I still causing to them? Are protesters there to be seen or not? Is there any value to being rude to people asking questions, as I watched them do to a couple others, just because they aren’t part of your protest? Isn’t that why you’re there? You will never convince someone who’s already hard-line for a cause. You’re whole purpose in protest is to convince the people in the middle, who aren’t firmly decided. To ignore them, or even chase them off, is just shooting yourself in the foot.
But… also not particularly shocking. The majority of the protesters were — by appearance — black block-ers. The people who go to ANY protest, in all black, wearing masks and imagining themselves to be the hard-core true-believers. My biggest problem with the black block, besides the fact that most of them are just obnoxious little pricks who protest because that’s what “you’re supposed to do”, is that they always do it with their face covered. Attending a public protest with your face covered is meaningless. You protest because you want to stand up and say that no matter what the risk, I personally support this cause. To do so in a mask removes any personal commitment, making you a useless twat.
And of all the things to be pissed about — to choose scientology says just as much about you as it does about them. They absolutely have some questionable practices. And I have a real problem with anyone who isn’t open to questions. But in just about every major religion you’ll find all the same basic issues as you do in Scientology. They all expect money… (tithing would have you give 10% of your income to the church). Mormons are just as secretive about their buildings and papers. Jehova’s Witnesses have difficult and questionable restrictions on medical practices. I don’t believe the scale at which the Scientologists do these same practices warrants this special attention. And on the chart of fucked-up institutions and practices that humanity inflicts upon itself, they don’t even make the Top 100.
In the end, I don’t care what they yelled at me. And if they want to film me, it just adds on to all the tourists’ shots I probably already show up in ever summer. And attacking me just for taking pictures of people acting strangely on the streets of one of the main tourist locations in the country makes them no different than the cop who stopped me a week after September 11, 2001 for taking a picture of an empty street. I’m sure the black block will love that comparison.