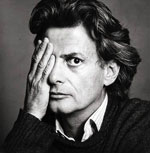 Finally went to the Avedon exhibit this weekend. Watching a video they had playing, he had an interesting quote. He said that every photograph is accurate, and that no photograph is the truth.
I’m sure even he would define photograph — in this instance — as the image as originally taken, since apparently early in his career he was not afraid to touch up his photos to improve their idealism.
I’ve heard friends describe my photos of people as “very honest portraits”, with the implied message that they’re not necessarily flattering. While I won’t share pictures I think are insulting, I think it’s good to keep in mind that any photo is simply capturing one particular point of view of one specific moment.