I am a very cynical person, especially when it comes to politics and patriotism. In fact, I have a hard time with the idea of patriotism at all. Having some glorious love for… a place. Yeah, I can’t do it.
But I did feel something yesterday, standing on the National Mall. It was frigid, and crowded, and made made me get up too damned early. And I really fucking hates crowds. All the ever do is confirm to me that most people are stupid. And this was a crowd of epic proportions — 2 million people. But through it all I was happy. And everyone around me was happy. The entire crowd cheered (or in the case of a Bush sighting, jeered) at the slightest provocation. 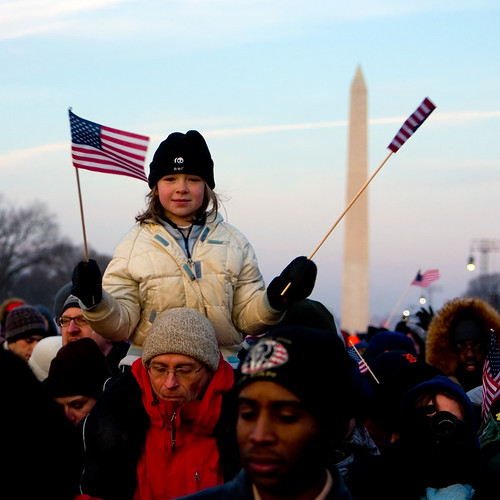 I don’t think we all realized how much we wanted Bush to leave. Yes, we’ve all* been trashing him. And yes, many people had countdowns on his term. And many others tried to get him arrested or impeached. But yesterday, there was a visible tension in every person, just waiting for the moment of change, (if you’ll excuse the use of that word). Wether it was the explosion of joy the moment the oath of office was completed, or the singing of “hey hey, goodbye” as a helicopter lifted the Bush family out of the capital, people just couldn’t wait to see him go.
(*I used “all” and similar phrases, because with approval ratings like his, Bush doesn’t have many friends left. He spent the last 2 weeks of his presidency basically asking people to not judge him too harshly.)
A politician running on “change” is like water running down hill; so I just ignore that. But Obama’s best attribute was that he gave people hope. The insanity, contradictions, and suspension of logic over the last 8 years — and the admittedly questionable practices of the last few administrations before that — have left me, at least, devoid of any respect for or expectations of the government. But along comes a candidate who doesn’t affect a man-of-the-people facade. He appears intelligent, ambitious, and energetic. He doesn’t appear to be tied to any major special interests. He seems open to whatever idea will best resolve the situation. With some of the first words of his presidency, he acknowledged groups of people and causes that most presidents ignored their entire terms. 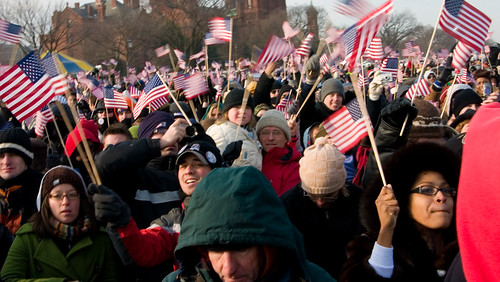 People really did just explode in joy and excitement down there on the mall when he was sworn in. I knew it was coming, but was still impressed. I didn’t even know there was a 21 gun canon salute going on until I caught it on the video screens, because you couldn’t hear anything over the cheering.
The musical performances were great, with a classical supergroup including Yo Yo Ma and Itzhak Perlman, and an incredible rendition of My Country ‘Tis of Thee by Aretha Franklin.
Obama’s speech was wonderful overall, with just a few weak sections near the end. Whereas Bushes early speeches were all dire warnings about tough times ahead, (and that was before 9/11), Obama said “yes, we have serious problems that will require serious time and resources, but yes we can and will meet them and overcome”. It was inspiring at the same time it acknowledged our rough conditions.
As I said, I have issues with patriotism. But yesterday I did feel good. It wasn’t in a “we’re better than them” kind-of-way. It was people who felt the finally had a reason to be happy again, to take pride in what’s being done in their names. 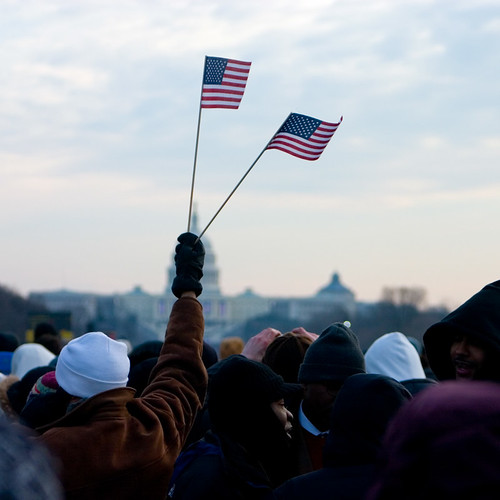 The man has made a good start. Some of his first actions, on is first full day in office were meant to instill trust in the Presidency again. He highlighted plans for transparency and openness. He supported FOIA requests, and even indirectly promised to deal with Bush’s attempts to lock up the past President’s papers out of the public eye. He placed salary caps for his top staff. He’d previous banned staffers from taking jobs lobbying his administration. They’ve leaked plans to order the shutdown of Camp X-ray and to reign in some of the CIA’s more questionable practices. And that was all just cleaning house. He also met with economic and military leaders, and spoke with Heads of State across the Middle East.