I have confirmed that yes, I can get drunk. It was not just watching the vice-presidential debate that made me wobbly last time. And I discovered that I’m a cheap drunk.
Ended up at Spellbound last Saturday after spending the day with friends.
I’d had really tiny amount to drink before going out. Maybe half a cup of beer (in the kitchen-measuring-tool sense — I don’t know the names of different glasses), and what amounted to a small shot glass of rum creme. I elaborate just to point out that it was nowhere near enough to get me drunk. And even then, it was a couple hours and some walking later before we even got to the bar.
The first rum and coke tasted good. There was some vague sense that I knew I’d had a drink, but nothing I could put my finger on. A Rum and Coke is the most advanced drink I can order right now with a straight face. (I made the ‘mistake’ of ordering a Rum and pineapple juice a couple months ago in the same place, and the bartender put it down in front of the woman I was with.) I wasn’t too far into the second one a while later when I knew it was gonna hit me. And about halfway through, it started to.
The first time I was drunk, I only knew because I was unsure about walking to my apartment from the front door. But this time I was nowhere near my apartment. The bathroom, just on the other side of the room, was going to be a big enough adventure. I finally decided I couldn’t lean on the bar forever. At this point I thanked several gods that there was a railing extending the entire length of the room. I was still able to walk, but with the effect of being half full of water that was sloshing around, throwing your balance off in random directions at random intervals.
And if there was any doubt in my mind up ’til that point, it was banished when I had to stop and shake my head to clear it before attempting to use the urinal.
I made it back out dry and alive, and spent the rest of the night leaning on the bar talking to friends. No more drinks, please. Pulled out my camera and snapped some shots in the last 10 minutes before they kicked us out. 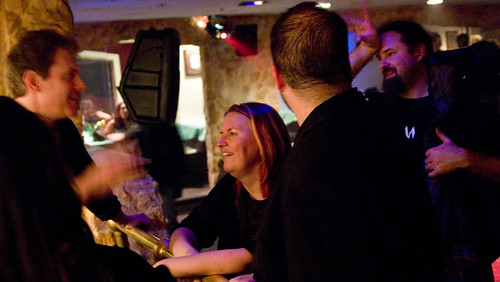 This lead to a new discovery for me. Drunken stairways. It’s like you enter this little pocket universe where normal physical laws don’t apply. Because I swear that with every step up, the center of gravity in the room would change!
I was a little nervous at the thought of ‘walking’ home. I was trying to plan out — in my head — all the places I could stop along the route to sit down.
But… I was surrounded by other drunk people who were not happy that the crepe place was closed. (It does normally stay open for the after-hours crowds). Amazingly quickly — for a group of normally indecisive people — it as declared we’d head up to The Diner in Adams Morgan. This made me happy: Good food that I don’t often manage to get, and people to walk with a bit further and keep me from falling over. That’s not a short walk, and it wasn’t a beautiful night or anything.
Adams Morgan at 3am is a busy place. And The Diner, even more so. We got in amazingly fast, considering. And by the time I was halfway through a breakfast, the food, the walk, and the fresh air must have all conspired to sober me up.
That was that. We split up there, and after walking a friend of a friend back to their hotel, I made it home a little after 5am, just in time to fall asleep while transferring the pictures off my camera.
…
I was talking with a friend while writing this; about what could’ve happened in certain situations. I said something about how my “good intentions”* would have been nowhere to be found. And I know that sounds bad to a non-drinker, because it would have to me 6 months ago. It sounds like the stereotypical “I got SOOO drunk and didn’t know what I was doing and did something stupid and…”. But that’s not really it. I’ve been conscious of everything the whole time I was drunk, and was capable of self-contol. But it is similar to when you’re tired and exasperated, but without the negative parts. I lose my inhibition and stop caring what I “should” be doing. Kind of just leaves you with your own conscience as your guide/censor.
I see potentially interesting and educational things in a situation like that. But it also scares the fuck out of the part of me that normally tightly controls how I release every little thought or idea. When I first mentioned I would drink, someone (probably Shannon or Stephanie) said they thought it would likely cause me to unwind and maybe actually be able to communicate freely. With two caveats, that seems likely. First: I’ve only been drunk twice, so I don’t have much of a data set yet. And second: in neither situation was I around people I typically have in depth conversations with.
So… wait and see.
…
In the mean time… as I said… cheap drunk. Two rum and cokes.
*Why are ‘good intentions’ so seldom any good? Mine have done nothing but cause me trouble. I rather stupidly bitched out a friend last year, at a point where it seemed like every time I tried to do anything “right”, it would explode in my face. Note to self: the next time you consider doing or not doing anything “because it’s the right thing and will lead to less problems later”; just don’t fucking listen to yourself.