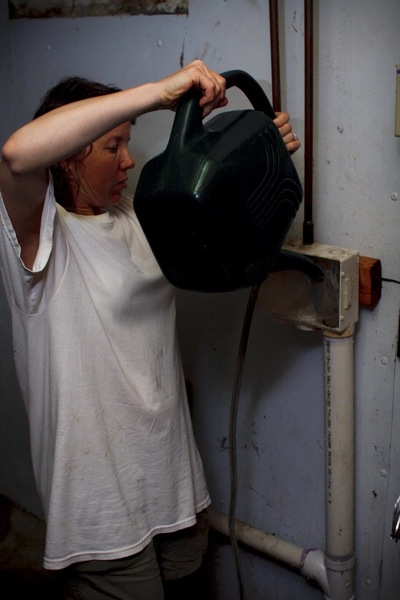 Yes we survived the earthquake. And the hurricane. I’m not so sure about the locusts on the horizon, though.

This street is apparently notorious for the power going out if someone so much as sneezes. This is a big change for me over living further downtown, where all the powerlines are buried. So with the approaching hurricane, we felt a little… doomed.

Knowing something would probably eventually happen, I suggested we go to bed, and try and get some rest while we could. Less than two hours later, at about midnight, the lights when out and the UPS started beeping. We threw on our clothes and went downstairs quickly.

You see, we have a sump pump in the basement, powered by electricity of course. And we have a drain on our back basement steps that empties into the sump pit. Not a good combination in a hurricane. The drain constantly fills the pit, and the lack of electricity means the water doesn’t get pumped back outside.

So we started bailing out water. First into the kitchen sink upstairs. Then after a few different tries, Heidi fashioned a makeshift funnel — out of a Windex bottle — that allowed us to reliably pour the water into an old washing machine drain.

Ten hours. For ten hours, we took shifts, bailing water out of the sump pit, before it couple flooded our basement. Around 10 oclock in the morning, after one false start, the power came back to life. Lights hummed. Hot water started percolating. And the pump was quickly reconnected and began work almost immediately. Even 2 days later, it’s still pumping water out of the basement pit every few minutes.

We’ll be getting a battery backup, and bilge pump, before the next big storm.