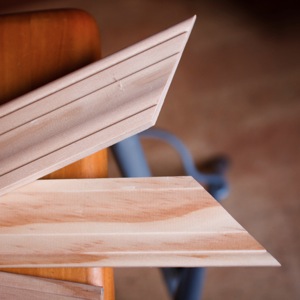 I am tall. My ex girlfriend was fairly short. So, when it came to living together, we had a hard time finding a single mirror that we could both get a good look at ourselves in. Top or bottom, something was getting cut off. (Let’s face it… the top was getting cut off. I’d much rather she looked good, than I do.) But while walking through Community Forklift, I’d found a larger mirror. A very large mirror; at least 6 feet tall, and a foot and a half wide. It had obviously been a sliding door on someone’s wardrobe, but it was now standing by itself. The whole surface was mirror, aside from a 1″ strip down the side. So… fairly generic. Obvious what it once was if you looked closely, but who looks too closely at bedroom furniture?

But I did want to do *something* with it. It was plain and functional, but not terribly attractive. Certainly didn’t fit in with any other furniture.

So I found some wood molding. (I originally tried to find some reclaimed molding at the same Community Forklift, but was never able to find anything suitable in a large enough quantity. The joys of a salvage yard.) So just some cheap wood molding at Home Depot. Simple shape cut into it… just enough for a bit of character. Would have been cheaper to go with a manmade material molding, if I was just going to paint it, but I wanted to stain it. Picked up the wood,and trimmed it to length for the 4 front sides of the mirror, with an inward 45 degree angle at each corner, so they’d fit nicely.

I decided to place the wood just on the surface of the mirror. It would obscure the strip along the one side. And the sides of the mirror are black, and very simple… no hardware. So in the finished piece, they just disappear. And since the wood is only on the face of the mirror, when I lean it back against the wall, all the weight is on the original mirror; so there’s no concern about the wood staying attached under the strain. If I ever do decide I’d like to box it in, the molding I used has a perfectly flat outer edge, so I should be able to apply another layer of wood along the outside, with no problem. 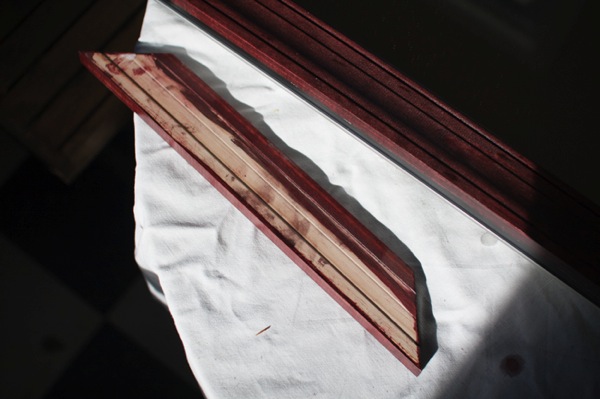 As I said, I stained the wood. Since it was already cut out to shape, there’s no real way to sand it, and it’s not that fine of a piece of furniture anyway. So I took some existing stain that I had from a previous project, and got it to the colors I wanted in about 2 or 3 passes. A lighter red stain overlaid with a pass of an almost black stain. Standard procedure… applied the stain with a foam brush, as smoothly and consistently as possible. Wait about five minutes, and wipe off the excess. And be sure to stain the back of the molding, near what will be the inner edge. The mirror will reflect back a tiny amount of it, and if you don’t stain it, it will be glaringly obvious. I also stained the 45 degree cuts, so that if any 2 pieces didn’t come together perfectly, it would be less obvious. And I then finished it off with a coat of poly to seal the whole thing, also with a foam brush. Probably not vital, but I wouldn’t put it past my life that this thing gets wet at some point. 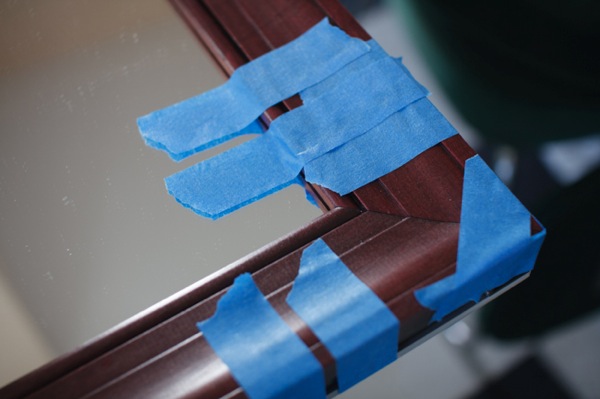 So now I had a mirror and the wood all prepped. I picked up a tube of Locktite adhesive specifically designed to work on mirrors, and a caulking gun (since I didn’t already have one), also from Home Depot. Applied the adhesive to the back of the wood, (careful to avoid the inner edge, since that could also reflect in the mirror when done.) I was aligning with the edge of the mirror. I placed the pieces one at a time, so that I’d have time to move each piece as needed before the glue started to set. And to ensure they stayed in place, and to deal with the inevitably warped pieces, I taped everything in place with painter’s tape. (Since painter’s tape won’t leave behind any marks when you remove it). Put some wood glue where any two pieces of wood met. (I hadn’t poly’d these seams). Because of the 45 degree joints, the reliefs cut into the wood meet up nicely.

Then it was just a question of waiting. I gave it about 2 days for the adhesive to set. Removed the tape, and put the mirror back in my bedroom. I’m very happy with it. I no longer have the tiny girlfriend, but I now have a big, really unique, functional piece in my bedroom, that I look at every day.