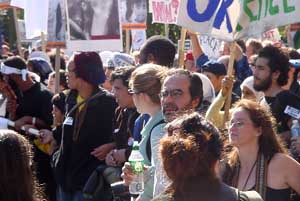 I wasn’t looking forward to yesterday’s protest very much. If you’ve read this far, you know mmy opinions of the annual World Bank/IMF protests. Barely pubescent weekend anarchists living out some delusional rite of passage.
“look how hard I am, man”
Yesterday’s protest didn’t get much buildup in the mainstream press. My only information came from some light pole banners and the anarchist web sites.
(The shit I read.) 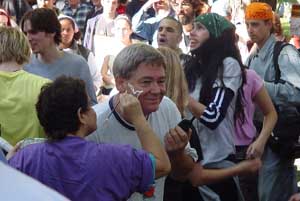 Right from the start this was different.
I couldn’t tell you why, but at least outwardly, the police didn’t overreact. It may have something to do with the fact that the event was officially taking place on National Park property which mmeant it was under Park Police jurisdiction for a change. And I did notice the MetroPD Mobile Command vehicle parked near the State Department. But the gratuitous placement of foot patrols on the street was minimal, and I had no real trouble crossing in front of Lafayette Park.
Maybe the police figured the lack of press would keep the event small.
Yeah.
This was the single largest protest I have seen in the Capitol since moving here. In fact, the only events I remember with more and more vocal attendence were the Fourth of July foireworks on the Mall and maybe the Shrub’s innauguration. (That last one is questionable, since it was hard to see much with the terrible weather and the Secret Service lieing to the specttors about access.)
Two hundred thousand people, they’re claiming. Wouldn’t suprise me.
And they were different people. 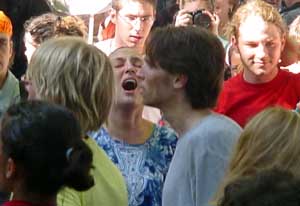 They were all there. The surest sign of the limits of the IMF protests is the sheer homogony of the participants. But yesterday they were black and white. Asian. Hispanic. Middle Eastern. Old. Young. Babies. Handicapped. It first really hit me as I watched one protestor try to step off the curb. She must of been at least 85 years old. She could barely move on her own, and relied heavily on her cane. But there she was, with a pin in her coat which cast dubious aspersions on the Shrub’s parentage.
These weren’t angry people with puppets and vinager soaked bandanas. They were just your average people, visably from every walk of American life; ethnically, economically, religiously, agewise. There were spontaneous crowds of people dancing and singing. Several times Isw people facing Mecca on their knees to pray. (And not all of them were Muslim). Barring the few apparently unavoidable profiteers, these were people who all shared a common cause, and gathered together to raise their cries as one voice. 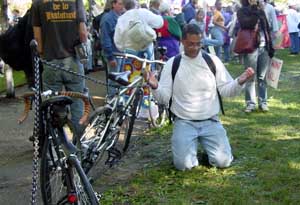 They were energized and orderly. They marched on the White House, and left in their wake, not broken windows, anarachy stickers, and spraypainted slogans, but crowds chanting for the disembodied sexual organs of the Shrub. Free people of every ilk coming together to express their hatred for the Ameriacan Resident and everything he has done. My God there are times I love America.