I think I love Laurenn McCubbin, in a sort of awe-inspired, jealous kind of way. (Well, she’s hot, too, but that’s more lust than love.) I’ve always had the impression that her paintings and drawing tend to start off as near-tracings of photographs. But even so, they have a fierce reality and unapologetic nature. I just picked up her work in Quit City last week, with Warren Ellis, and have ordered Rent Girl, which she did with Michelle Tea. Hopefully by the time her next online sale comes ’round, I will have paid my taxes, received a few back invoices, and be able to get something. Would love an original work. But we’ll see if I’m feeling that rich and stupid. I’ve said before, (I think), that I tend to love work that is “of its time”. That describes her stuff as well as anything. 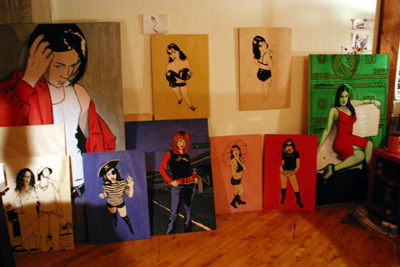 Went to Chiaroscuro again this past weekend. Still didn’t dance, though it had more to do with the type of music than my general wimpyness this time. (How do you find a dance beat in metal?) But it’s a fun place. Most of the people are there to have fun and be seen being freaky. The evening started with a woman in a net top and no nothing else dance up on stage. And near the end, the bartender started hustling up on the bar for tips. She was… amazing. All curves and tattoos. My camera phone flaked out for the first time right then, or I’d have some good shots.
Went to the club with Kier and his sister, Cheri. You know… she just feels like someone’s little sister. At what age do you stop feeling like that? Cheri is 25, and had no trouble finding companionship that night. But she’s still like this adorable kid, fooling around on the subway home.
*shrug*
You know.. Pixel has been totally traumatized about her cat carrier since I took her in for the operation on her ass this fall. She cringes at the sight of it, and will attach herself to the floor under the couch if need be to avoid getting crated. But after leaving the carrier on the floor after taking her for her shots yesterday, she’s been sleeping in it each night.
I swear, she must be Republican.
Anyway, I just felt the need to write. Blow off a little steam, since I didn’t have time to paint. I always tense up for days when I have to design a piece from scratch. Production work I can knock out in no time. Job management I love. But original designs almost always intimidate me. (Though since I’ve left OldCompany, I have done much more original work, and received much better reviews for it). So yeah… I got conditional approval on a few designs today and can get on with the project now. And if I move my ass, I may have time to paint this weekend.