Yay! Dragon*Con. Or… ”What I did on my Summer Vacation”.
Many of my friends are geeks, and therefor attend the annual geek prom gathering in Atlanta known as Dragon*Con. Besides being 60% geek myself, I also have no backbone, so I must do what all my friends are doing. After several years of encouragement to attend, I decided at the last hour to go ahead and buy a ticket.
The last minute thing, (actually more like 4 weeks) seemed to be beneficial. It was all just a casual adventure,… to… uh… a 4 star hotel with 50,000 other people. But there’s something liberating about hopping on a quick plane flight to a city you’ve never visited, taking the subway you’ve only checked out a map for once, and stepping out someplace new. And it doesn’t hurt I was only a block from my final destination. As opposed to friends who’d been panicking for months over costumes and hotel rooms and whatnot… I was having my own little redneck adventure. 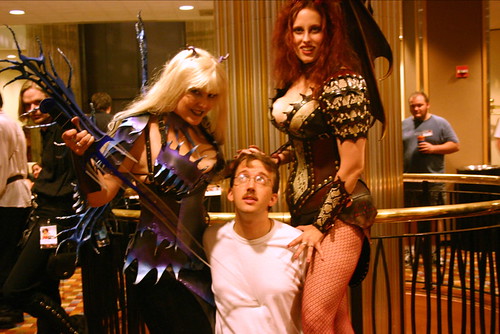 The hotels are really absolutely beautiful, having been built in preparation for the ’96 Olympics. Aside from their horrendous food service, ($5 for a slice of pizza, $6 for a beer), the only bottleneck the whole weekend were the elevators. And even at the height of the Olympics, they probably weren’t carrying 10 people each, non-stop, 24-hours-a-day.
Really, for the price of a ticket, (anywhere from $40 to $80) you got access to an amazing amount of information and entertainment. Non-stop crowds of people all begging to be ogled at. Twenty tracks of simultaneous programming on every possible sub-genre of pop-culture; from 10 to 10 every day. After hours, there were concerts and shows and parties and contests. There were hundreds of dealers and exhibitors hawking their wares. There were artists showing their stuff. In the hilton I never quite made it to, there were rumors of gamer gatherings in rooms smelling of Febreez, and hallways full of celebrities.
And don’t forget the free food. 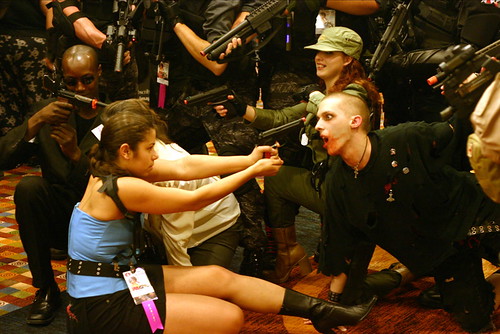 I went to presentations on art, and tattooing, and science fiction, and … I don’t know what. At least 15 or 20 programs over those days. A little bit of celebrity gawking too, at a Stargate panel. If you have some random useless interest, I probably indulged in it.
It probably would have been the geeky nirvana I’d been promised if I hadn’t gotten sick within a couple hours of arriving. Even now that I’m mostly better, I have no idea what hit me. It wasn’t just a simple cold or flu, since there were no temperature flashes, hot or cold. I thought it was exhaustion at first, but no matter how much I slept, nor how well I ate, it came back. It had all the symptoms of hypothermia, but barring overzealous air conditioning, the temperature never dropped below 70. Bu even so… if I got too cold, I would start trembling, and be unable to raise my body temperature. And nothing was going to stop it until I laid down under a warm blanket for an hour or so. In the meantime, every bone ached and my head swelled to near bursting. I finally suffered what felt like a small stoke in the foodcourt, one meal. My eyes glazed over, I couldn’t hear, and I could barely think. (I’m sure that’s not just a reflection on KFC’s food). It did eventually pass, and I slept off the effects, though disappointed the friends I asked to watch me to make sure I got back to my room bailed on me. Otherwise, friends were very supportive all weekend about the ridiculously timed disease.
Feeling good as I was, (note: sarcasm), I got a call on Saturday morning. My sister had just taken my mother to the hospital, due to shortness of breath. By that afternoon they found 3 blood clots and had admitted her to the hospital. That really sucks. But now that the problem was identified, she was stable, not likely to worsen, and just resting in the hospital. Spending days and massive amounts of money to get back to NY seemed like an over-reaction. But it still makes you feel kind of stupid to be watching people prancing around in costume.
I’m not trying to make it sound like all was despair. Quite different. Sick as a dog, with a family crisis, and friends bickering about petty things, Dragon*Con was still so loud, so big, so full of energy, that I couldn’t help but enjoy myself. I don’t know about next year yet.But I can think of worse way for this weekend to have gone.