Haven’t written about drinking in a while. Has been about 7 months now, but I’m still usually pretty overwhelmed. Still sticking with variations on the whole “Rum and Coke” theme, when all else fails.
This weekend was mildly adventurous. I don’t know how many new drinks I ended up trying. There was a party out in Georgetown with Lindsey, on Friday night. Had a Vodka-Cranberry thing, that I think was pretty badly mixed. So while I completely distrust the taste, it was my first vodka. Followed up later with Gin and Tonic, which tasted like… nothing. The people drinking with me assured me that this is what Gin tastes like… but it had almost no taste at all, to me.
Anyway.
Last night was a housewarming and barwarming for some friends who moved in together. You know… I started the night wanting a glass of White Wine. Never got it, the whole night. Purely my fault. Just saying. But I made up for it with plenty of other drinks. The first thing I was handed, after asking for “anything”, was a SoCo and Coke; another first. Just tasted like pure candy. A sweet, sticky, fruity taste. (Dangerous drinks… so very tempting to down them like a soda.)
Shiiiiit. My mind just blanked on the second drink of the night. All I can remember is that it was another first. (Guess it will be again, if I don’t remember what it was…
wait….
Okay… there were two martinis. One Chocolate thingy. Just sort of a chocolate YooHoo that burned on the way down. And later, a White Russian, I think. Dunno what’s in that, but it tasted just slightly different than the chocolate martini.
There was a Coke Zero in there somewhere, just for the sake of getting some non-alcoholic fluids in me.This was the point where I was starting to really feel it. Turn my head too quickly, and my brain didn’t stop turning with the rest of my body.
But the Coke, and the cheeseburger off the BBQ grill, as well as an hour or so of conversation and nachos, all served to sober me up a bit. No more speeding perceptions problems.
Tried to behave myself after that, and just had a Woodchuck Cider, which is probably just this side of cough syrup. But of course, just as I’m finishing off that, sitting nicely on the couch and talking with friends, the host decides that everyone with an Irish name had to have a Carbomb. Now I’ve heard the phrase, but I have no idea what was in them.
About 10 minutes later, that was that. And I think it pretty much wiped out everyone involved. 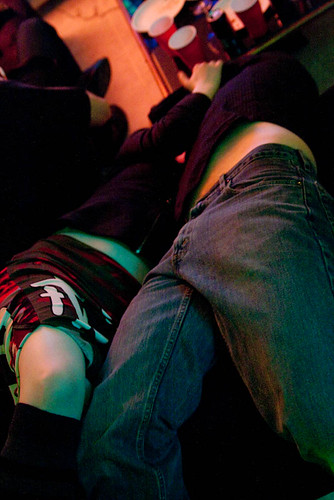 After that, walls and railings were my friends. No nausea or anything… just plenty of vertigo. Lots of careful concentration in getting to the car, and up to my apartment. (I really must learn to find hawt chicks to help me with that). Head was buzzing by the time i laid down to go to sleep. Almost didn’t get up to grab my water bottle. But I as I had a client meeting this morning, I didn’t want this to be my first hangover.
General observation: drunk with friends is fun. It’s an exaggerant of the general mood. You do silly shit. (No… I will never let my aunts live down the time they got drunk and all climbed in the bathtub to start singing). But drunk alone is just not fun. It’s all the physical deficits, with none of the social benefits.
I’ve certainly had drinks here and there. But judging from these journal posts, this is the first serious session of braincellkilling since January. Yup… still failing at the whole lush thing.