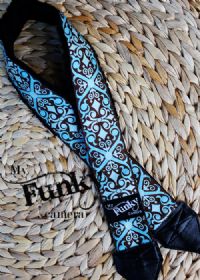 Picked up a new toy, this week. Well, I picked up several, but this one is my favorite so far — a new camera strap.

The old strap — from Epic Software — itself was holding up fine. But the connectors for attaching it to the camera were failing one-by-one. The smallest leather straps actually snapped less than a week after I got the strap. But not big loss. I just merged a couple of the metal bits. But in the last month or so, the larger leather straps have been failing as well. One is already gone. And while I CAN again just merge a couple metals connectors, I lose the capability for the strap to swivel, so it inevitably becomes twisted. And the last leather connector gets worse every day. Every time I grab the camera out of the bag, I cringe and wait for it to snap.

And even if I was willing to live with that, because I’m now down to metal bits connecting the strap to the camera, it has been scratching the hell out of my camera body. While I’ve never been one to baby my equipment, I don’t feel the need to purposely deface it either.
Older cameras just had small swivel points with just a single small hole in them for mounting a strap. So ring connectors made sense. But newer cameras almost universally have slots for attaching straps. These nylon strap connections are less damaging, more flexible, and usually last longer.

But since I had neither the thin straps nor the sewing machine to attach them, I just went looking for a new strap. Can’t stand the straps you find at most camera stores or online shops. They’re all either flat black straps, or the come with the manufacture’s name emblazoned on them in bright, bold 150pt type. But almost no one makes more interesting straps. Epic’s straps were great looking… very retro. But I wasn’t interested in going through the same problems again. A little searching, though, and I finally found My Funky Camera. A woman who apparently buys the parts and makes her own straps — neck or wrist. Thy sounded pretty good, and I found some good reviews online. Her website is a bit lacking in details, but I figured it was worth the minor risk. My order arrived yesterday. Initial impression: I was impressed. It was actually made of much sturdier material than I expected. And it did indeed have the nylon attaching straps. I’m dubious about how long the extra neck padding will last, but it looks good right now, and could be easily removed later. It fit easily only to the camera. It looks great. I have a shoot tomorrow, and a major trip coming up in a couple weeks, so I will be putting it though it’s paces.