The house – when we bought it – had an overly large, inappropriate light fixture on the front porch. So it became a low-priority fix, with us occasionally looking at new fixtures. But when we came upon something nice and size-appropriate at the Community Forklift, we grabbed it, and prepared to put it up.

After shutting off the power, we took down the old fixture. Fairly simple… just screwed in. Even simpler than we expected, really since there was no junction box, nor much of anything else. Just a couple brackets screwed to the wall and shimmed in place. 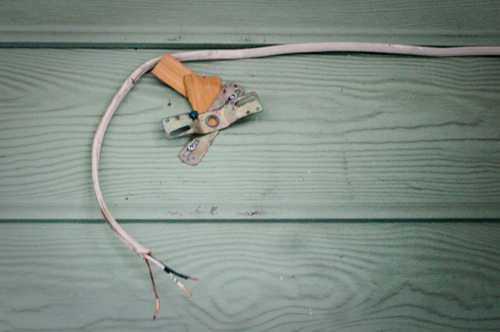 A little bit crazy, but we were taking it down anyway.

The new fixture was going to be ceiling-mounted, rather than wall-mounted like the old one. So we searched for the appropriate placement, and planned on fishing the wires from where they had dropped down to the old fixture, to the middle of the porch for the new fixture. Lots of fumbling around, trying to grab the right lines.

But Heidi noticed something weird. So I reached up and grabbed some lines that were unexpectedly right near the new hole. Pulled them through. Turns out, the line running to the old fixture had simply been loosely tied into a electric line running the length of the porch. (Presumably from some even older fixtures). Just capped and lightly taped, and dumped on top of the wooden ceiling. Again, no junction box. 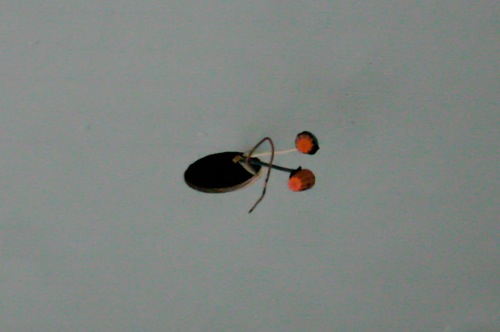 Well, we installed the junction box, installed the light. Taped up everything. It all looks much better. And we try not to think what else we’re going to find in the future.