Drinking and Defining “Is” 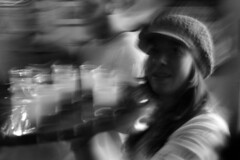 People behave rather ridiculously if you say you aren’t drinking. They don’t care if you aren’t eating, or you aren’t dancing. But if you don’t have a drink, there must be something interesting happening. And if you’ve never had a drink, the information will travel. It will be spoken in tones normally reserved for discussing your friend fucking the new girl in the bathroom while his fiance danced 20 feet away. You’re cute, and naive, and “probably better off”. And once the message has spread, coming up at every social gathering, to inform those people who hadn’t heard yet, you will never be offered a drink again. You will forever be the quick, quiet, friendly joke when drinking comes up.
The only thing that will make it more ridiculous is to try and explain that you’re not “not drinking”, but that you’ve just never had a drink. People look at it as one of those bullshit, convenient excuses to justify something with no logical explanation.

Why haven’t I had a drink?

The big shadow looming over all is of course, my father. A lifelong alcoholic, despite not having had a drink in probably 20 years. But growing up in the family of an alcoholic means spending your formative years hearing that nothing good ever comes from drinking. Drinking means fighting, and yelling, and coming home late at night to go immediately to bed. Drinking is years of self-help and rebuilding your life, and breaking up your family, and…

Of course you grow up, and you realize most things you learned growing up were questionable at best. Alcohol, like most everything in life, is not inherently evil.

Addiction is the heart breaker, making people do things despite knowing they’re wrong. And the wonders of modern medicine came along just in time to tell me that addiction — especially alcoholism — could very well be genetic. Was your father a drunk? Watch out. You could be too. And educated, reasonable debate never had a strong toehold in my family. Don’t do drugs… they’re all evil and will destroy your life… worse than anything else. Sex education consisted of never closing your door when you had a girl in your room. (Lucky for my mother I was never gay). And whatever you do… don’t drink. One drink and you could become an alcoholic.

I don’t believe that anymore, of course. It is a “belief”, though, because it’s never been tested. So I can’t provide logical arguments to support it. Just practical experience through many friends and acquaintances, and knowledge of my own mind.

(And don’t get me wrong, I don’t blame my family for anything. What happened when I was a child was long ago; and you simply can’t live in the past. That’s as bad an addiction as any drug. And now, I am an adult, and have no one to blame but myself for any choice I make.)

Momentum can make it pretty hard to drink, as well, after a while. Don’t drink when you’re a teenager? Rare, but sure to be fixed in college. Don’t drink in college? Weird, but then someone has to drive us out for burgers at 3 AM after the keg is tapped out. Don’t drink in your 20s? Is something wrong… are you a recovering alcoholic? Don’t drink in your 30s? Wow… didn’t Steve Carell make a movie about you? It keeps becoming a grander, more momentous thing with each passing moment. If it’s not now an elixir of the gods, turning me instantly into Buddy Love, then everyone involved will be surely let down.

Maybe I exaggerate a bit. Just a bit.

Probably the biggest remaining issue, that still trips me up is simple neuroses. It’s really no secret that I think too much… worry too much. I am forever trying to keep myself from saying or doing something stupid, even while knowing full well that every great thing in my life has come from moments of ignorance or stupidity. While nowhere near as closed off as some people believe, I am forever trying to maintain personal control, like my friends are squirrels who may scamper off at the first loud noise. And the idea of drinking is like purposely ripping a hole in that dam. What stupid thing will I do or say that will ruin everything?

Of course that’s stupid. I said it was a neurosis. But like seemingly everything in life, it’s easier said than done to actually ‘fix’ it.

The next time you ask someone why they don’t drink, (*ahem* “haven’t had a drink”), think about this. And ask yourself would you rather hear all that in the middle of a party, or maybe that joke they make is just a little less likely to kill the mood.