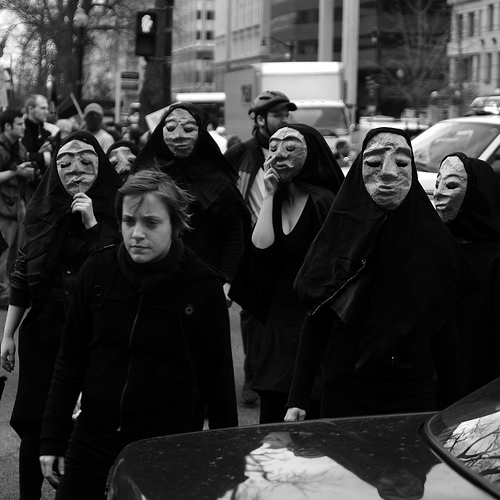 There are images that should be captured. Moments that feel like they exist to show you something. Beyond just “I wish I had my camera”, they have everything coming together, and you can see it all slipping into place, and you know something’s going to happen.
That’s about what I felt for the above photo. I was just watching a protest coalescing on the far side of the street. I was in a small group of reporters from various media sources. They were all trying to figure out what to shoot next, while I was just thinking that the protest had pretty much run it’s course. It would still go on for a couple hours, but the passion and excitement was gone, and people were only protesting because they were there to protest.
And while I’m watching, this black-robed group detached itself from the main body of protesters, and started sweeping across the street. And that was it. I could see this was the image. I took a quick glance around to see how many people I’d have to fight to get space to make the shot. But no one was paying attention. None of the professional media people cared. None of the vastly more numerous public photographers was watching. You can even see photographers in the background of the image, ignoring them completely. And there was an empty spot just 5 feet away, right in front of the smoothly approaching image.
I swung around and pulled up my camera, and cars started driving in front of me. Bastards. And seconds are slipping by, and it’s only 4 lanes, and they’re getting closer. And then… click. One image. I normally shoot a 3 or 4 shots of anything, just to avoid a blink or a sneeze or… but no. I got off 1 image. And they were gone. But I love it. Contrast, repetition, art, humanity, the unexpected.
This wasn’t my most popular shot of the morning. But I like it the most.